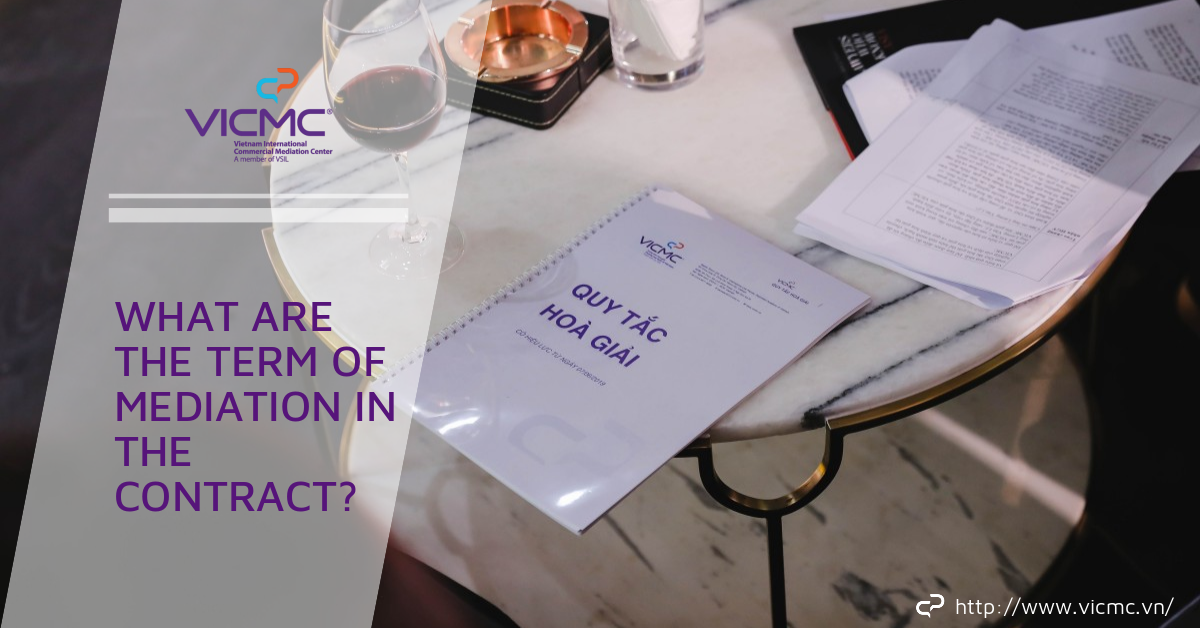 The terms of mediation in the contract are understood as the agreement of the parties to put the dispute arising out of settlement by means of mediation.  According to the practical experience of mediation in developed countries, a common mediation clause will be drafted as follows: “In the event of any dispute arising out of or relating to this contract, the  The party agreed to conduct a good faith mediation at the Vietnam International Trade Mediation Center (VICMC) in accordance with the Center’s Mediation Rules.  The parties will be bound by the dispute settlement agreement reached from the mediation process.”[1]  Similar to the arbitration clause, mediation can be specified in a clause right in the contract between the parties or agreed upon in a separate contract.  This provision may be drafted before or after the dispute.

The question is that when the parties have a terms of mediation (for example, the parties agree to conduct mediation at the Vietnam International Commercial Mediation Center VICMC) and one party unilaterally sues the Court.  Does the court refuse and require the parties to conduct mediation at VICMC?  Under current regulations, the parties’ agreement to mediate is not a basis for the Court to refuse to accept the case.  As such, it is meaningless or at the very least that the parties have agreed to mediate to encourage the parties to resolve the dispute by this method, but there is no binding meaning of a regulation in the case.  Many researchers and practical activities in the field of mediation in developed countries have said that the Court’s failure to recognize and require the parties to enforce the mediation agreement before accepting the case is contrary with the basic principles of the contract and does not support the development of this method.  No one forces the parties to participate in the mediation agreement, so in principle, the parties are responsible for respecting and enforcing what they have agreed to. In addition, in terms of policy, in order to promote the development of the mediation method, contributing to promoting the socialization of dispute settlement in order to reduce the load for the Court system, the act of suspending the acceptance and handling the case and asking the parties to mediate first of the court is a very significant job.

The basic issue here is the consideration between the two parties to ensure the right to access the Court system of organizations and individuals in society or to encourage the parties to resolve a dispute quickly and effectively through mediation, reducing the workload for the Courts.  Currently, the laws of some countries such as England, Australia, Hong Kong, Singapore … are also following the trend of recognizing the imperative of the terms of mediation.  According to the experience of these countries, in the case of a contract between the parties with terms of mediation, the Court will only process the case if:

(i) the terms of the mediation between the parties are not specified (for example, do not set a time limit for mediation), or

(ii) when the contract mediation expires but the parties do not conduct the mediation, or

If the complainant fails to prove the dispute in any of the above cases, the Court will suspend the proceeding process and ask the parties to implement the terms of mediation first.

The advice for Vietnamese businesses is that if there is an agreement on mediation, then when the dispute occurs, the parties should carry out a goodwill cooperation, and only when it is impossible to successfully mediate the proceedings to court or arbitration.

The board of VICMC secretary International Mediation Singapore (IMSG) is the first international competition on mediation held in Singapore with the participation of 48 teams (about 173 participants) from 30 countries and territories in 2020. The Singapore Convention Week, organised by the Singapore Ministry of Law, brings together top practitioners… On 03 July 2021, VICMC Mediators had an internal meeting with the topic “Shareholders’ disputes – Overview and experiences”. Chairman Nguyen Hung Quang and Mediator Phan Duc Hieu, were keynote speakers of the event.

On the evening of June 17, 2021, the students receiving the GES (Globalized Era Scholarship)…