According to information from the press recently, 24 out of 28 successful bidder companies selling rice to the General Department of State Reserves (GDSR) refused to sign the contract to implement the bidding package (“Contract”). The reason is comparing to the date of tender opening (12/03/2020), the rice price has increased from 1.200 to 2000 VND per kilo, which arises from the demand in the domestic market and the volume of rice increased rapidly and unexpectedly. The shortage of rice due to the refusal of signing this contract was up to 170.000 tons. From the refusal of the contract, GDSR must hold the tender again to offset the shortage of rice and ensure the target for the national rice reserve. On the side of the business, if multiplying the increased price above with 170.000 tons, we will have 204-340 billion VND. This is the amount that these 24 companies have earned before tax for refusing to sell rice to GDSR. 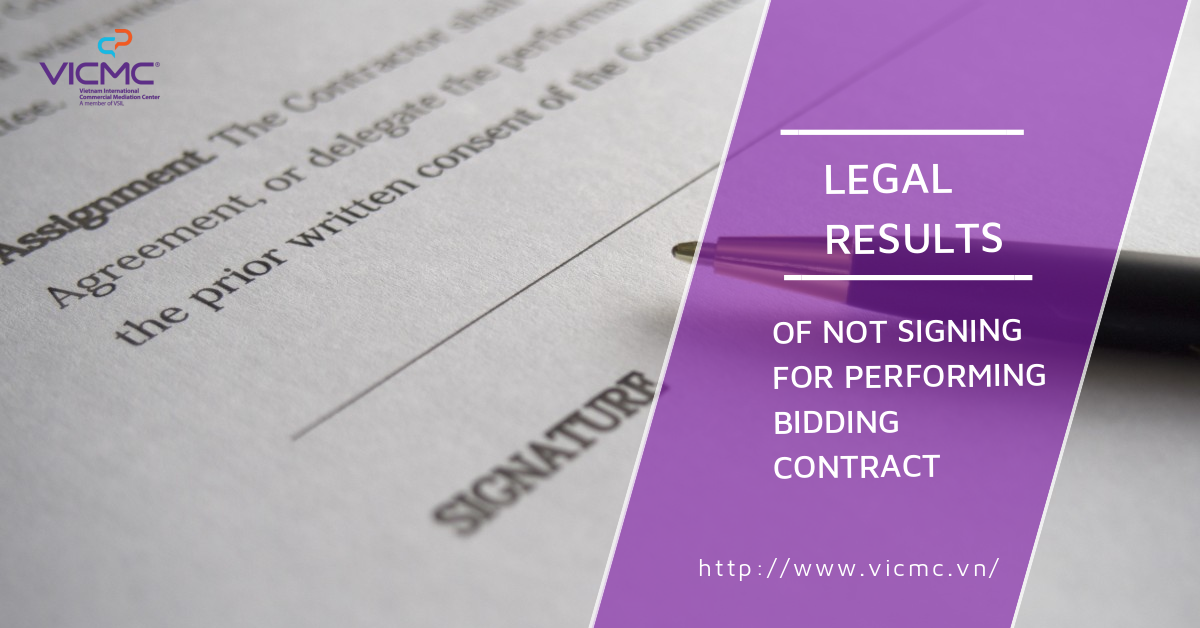 NOT SIGNING THE CONTRACT

According to information from the press recently, 24 out of 28 successful bidder companies selling rice to the General Department of State Reserves (GDSR) refused to sign the contract to implement the bidding package (“Contract”). The reason is comparing to the date of tender opening (12/03/2020), the rice price has increased from 1.200 to 2000 VND per kilo, which arises from the demand in the domestic market and the volume of rice increased rapidly and unexpectedly. The shortage of rice due to the refusal of signing this contract was up to 170.000 tons. From the refusal of the contract, GDSR must hold the tender again to offset the shortage of rice and ensure the target for the national rice reserve. On the side of the business, if multiplying the increased price above with 170.000 tons, we will have 204-340 billion VND. This is the amount that these 24 companies have earned before tax for refusing to sell rice to GDSR.

Is refusing to sign the contract an infringement? First of all, according to Article 65 of the Bidding Law 2013, people having demand for procurement and selected contractors “must sign the contract to perform the bidding package”. Thus, this is an obligation prescribed in the bidding law. This regulation is very clear. Circular 05/2015/TT-BKHDT dated June 16, 2015 of the Ministry of Planning and Investment provides specific provisions on preparing the application for bid on procurement of goods (“Circular 05/2015”). The regulation is specified by a fairly detailed model contract that must be included in the procurement entity’s bidding document for all contractors. All citizens must oblige to obey the law, and violation of law must have sanctions. Also according to the press, rice companies that refuse the contract will only be punished by losing the money to secure the bid, about 1% to 3% of the tender package value stipulated under Article 19 of the Decree 63/2014/ND-CP dated June 26, 2014, detailing the implementation of several provisions of the law on bidding regarding the selection of contractors (“Decree 63/2014”). In fact, this is not all by law. Decree No 50/2016 dated June 01, 2016 on penalties for administrative violations against regulations on planning and investment (“Decree 50/2016”), Clause 1 Article 21 regulates “A fine of VND 10,000,000 – VND 15,000,000 shall be imposed for failure to carry out a contract negotiation in contractor selection or preliminary contract negotiation in investor selection”.

The will of Decree 63/2014 maker is clear: not signing the contract is a violation of the law but only punish with a penalty rate of 1% to 3% of the bidding package price plus an administrative penalty between 10 and 15 million VND. The question is if the contractor is subjected to a heavier legal/financial liability, does the applicable law allow it?

Article 90 of the Bidding Law 2013 (Dealing with violations) regulates:

“1. Any organization or individual who breaches the law on bidding and other relevant law shall, depending on the nature and seriousness of violation, be disciplined, sanctioned administratively or liable to criminal prosecution; in the case where violation of the law on bidding causes damages to benefits of state, the lawful rights and benefits of organizations and individuals, the offender must pay compensation as prescribed by law.

In principle, it is absolutely possible to take a not signing contract infringement out of the scope of Article 19 Decree 63/2014 to put it back to its true essence is “violation of bidding law” according to Article 90 of the bidding law 2013. If Article 19 Law of the bidding law 2013 is applied and criminal prosecution is not carried out[1] or the prohibition of participation in bidding is not necessary to apply for the refusal to sign the contract, it is possible to at least investigate the compensation liability of breaching party. Specified compensation could be debated (this is a potential dispute which will be discussed below), but the breaching party’s obligation to compensate for damages is also an opportunity to re-establish the balance of benefits for both parties.

In addition, it is possible to reinforce the provisions of obligation in Article 65 of the Bidding Law 2013. According to the applicable law, as mentioned above, in the bid invitation documents, the main contents must be clearly stated and include a model contract (according to Decree 05/2015). However, there is no provision about the contract and the signing of the contract in the regulations forbidding parties on the content of the bidding application, which legally is the acceptance of participating in bids according to the requirements of bidding documents. Such a provision could be supplemented to Decree 05/2015 and this shall be the commitment of a party to sign the contract. Therefore, the infringement of not signing the contract will be made clearer.

If there is a dispute, the object of the dispute cannot be the obligation to sign the contract or the loss of the money to secure the bidding guarantee. In other words, in the Decree 63/2014 and article 19 of this Decree, there is no potential dispute relating to not signing the contract. The dispute may potentially arise if the Article 90 of the bidding law 2013 is applied, specifically relating to the compensation liability for damages (In this case, it is compensation liability for damages out of the contract). Specifically, GDSR is the tenderer who is also the party most likely to suffer from damages, will initiate a lawsuit against the rice companies for not signing the contract.

Regarding the jurisdiction to resolve disputes, article 93 of the bidding law 2013 prescribes: “Resolution of disputes in bidding by courts shall comply with the law on civil procedures”. The 2015 Civil Procedure Code, Clause 6, Article 26 regulates disputes related to non-contract compensation under the jurisdiction of the court.

On the other side, Decree No 22/2017/NĐ-CP dated February 24, 2017 of Government about commercial mediation, regulates under Clause 2 Article 2 that: ”Disputes among parties where at least one party has a commercial operation/activity” is in the scope of resolution by mediation.

According to the legal document mentioned above, the dispute could be resolved by the court or mediation. The choice of mediation depends on the parties in the dispute, through a written mediation agreement and show that the involved parties agree to settle the dispute by mediation. This agreement may be made in advance, after or during a dispute resolution process, which also means that the parties may be able to flexibly choose to conduct the mediation process at the time they deem appropriate, even during another alternative dispute resolution (like negotiation, arbitration) except in case the dispute is being handled by the court.

The outstanding advantage of this method is the proactive right of the parties to the dispute: in addition to determining the time when the mediation starts as mentioned, they have the right to choose Mediation Center; mediators fulfill the standard of understanding the full information about the case, understanding the viewpoint and benefits of the parties to the dispute and ensuring the objective, unbiased; Mediation locations and the language used in the mediation process (if the parties use different language proficiency); and the time of the termination of mediation, even during the mediation process.

The second advantage is from the fact that mediation is a negotiation between the parties but with the involvement of a third party – the mediators. Everything from the information discussed in the mediation process to the methods, procedure for conducting this process must be agreed by parties. The result of mediation is a successful negotiation result. Therefore, a partnership between the parties before the dispute was preserved despite the dispute.

Thirdly, all information related to the parties, the content of the dispute and to the request, and the arguments of each party mentioned in the mediation process are confidential. Such information will not be used against the involved parties in any later resolution process of the same dispute if mediation does not yield the desired results.

The written mediation agreement, after signed by the involving parties and the mediator, is enforceable upon the parties. This document may be recognized by the court in accordance with civil procedural regulations if there is a request for recognition by one of the disputing parties.

[1] In the current criminal law, there is no violation related to national reserve that is prescribed as criminal Lawyer Nguyen Hung Quang, Executive Director of Law Office NHQuang & Associates, Chairman of Vietnam International Commercial Mediation Center (VICMC) had an interview with the Customs Newson about the implementation of the Law on Electronic Transactions (amended).